Message from UNEP Regional Director and Representative for Asia and the Pacific On the World Oceans Day 8th June 2021
This year's theme of the World Ocean Day -life and livelihood- is an important reminder of humanity's reliance on the ocean and the environment at large, in our efforts to build back sustainably from the pandemic and its aftermath.
The ocean produces at least 50% of the planet's oxygen, plays a critical role in balancing our climate, is home to most of the earth's biodiversity, nourishes billions of people and is estimated to employ 40 million people by 2030.
Humanity's interconnectivity with the ocean is core to our identities, cultures, and ways of life That's why this year, World Ocean Day is focused on building a new balance with the ocean that is inclusive, innovative and informed by those who depend on it by drawing lessons from the past.
On June 5th we celebrated World Environment Day, which marked the start of the UN Decade on Ecosystem Restoration- a ten-year concerted effort to prevent, halt and reverse the degradation of ecosystems worldwide, including our oceans.
The UN Decade on Ecosystem Restoration could not be more opportune and links to the UN Decade on Ocean Science for Sustainable Development. Science tells us the next 10 years will be the most important to prevent the catastrophes of climate change and the extinction of up to a million species. We can only achieve these global goals if we protect our marine and coastal ecosystems.
Pollution, including from plastic, poses a major threat to our ocean, rivers and our rich aquatic biodiversity. Global plastic production was 359 million tonnes in 2018. COVID-19 has further resulted in a resurgence in single-use plastics and mismanaged hazardous waste.
If current consumption and waste management practices continue, the amount of plastic waste polluting the ocean will grow to the equivalent of 50kg for every metre of coastline per year, by 2040.
In the Asia-Pacific region alone, the damage from plastic litter to fisheries and aquaculture, marine transport, shipbuilding and marine tourism industries has risen nine times to become an estimated US$11.2 billion in 2015.
Thailand has taken a leading role in the adoption of regional frameworks to guide coordinated action, including the Regional Action Plan on Marine Litter of the Coordinating Body on the Seas of East Asia (COBSEA) and more recently the Association of Southeast Asian Nations (ASEAN) Regional Action Plan for Combating Marine Debris.
COBSEA is further working closely with Thailand in regard to marine and coastal spatial planning including through capacity building and supporting development of a conducive policy environment.
UNEP is supporting the Government of Thailand on Natural Capital accounting focusing on the tourism sector in the coastal zone of Krabi province, and will facilitate the private sector in mitigating environmental impacts and restoring and protecting nearshore marine and coastal ecosystems.
We continue to work closely with the Government of Thailand and key stakeholders to prevent and reduce marine litter including through regional projects such as SEA circular -which aims to reduce land-based plastic leakage into the marine environment- and CounterMEASURE and contribute towards building a Sustainable Blue Economy and implement resilient ecosystem-based approaches. 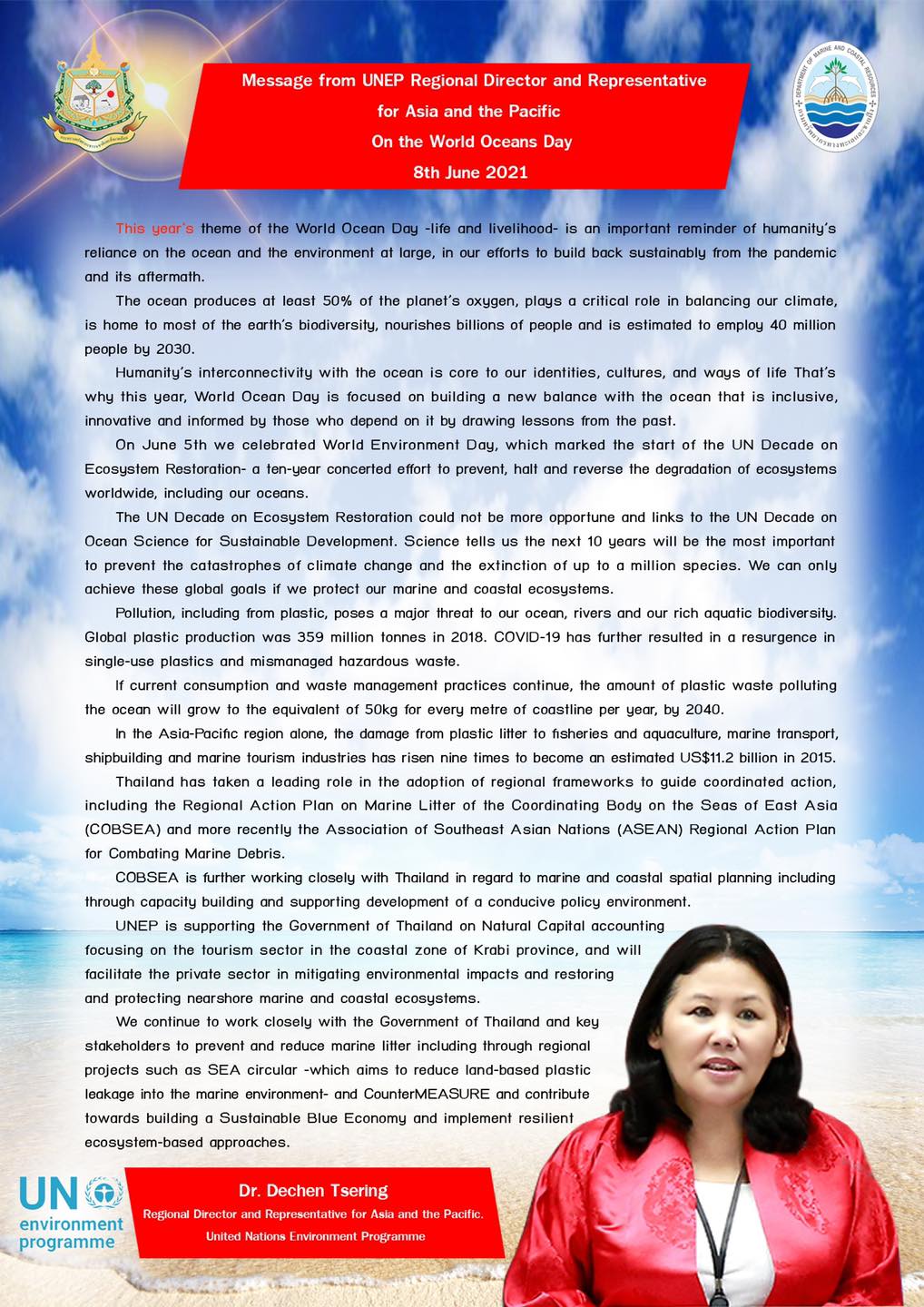